Norfolk does not boast many large forests, comprising mostly of small pockets of woodland dotted around the county. But what Norfolk doesn't have in quantity, it makes up in quality; tucked away off main roads and down tracks, there are several hidden gems of ancient woodland, all with their own qualities and highlights. Depending on what you're after and who you're with, there is surely a woodland near you to be explored. Here are my top 5, some well-known, others less but all will guarantee a feeling of excitement and that certain relaxing feeling one gets when amongst the trees.

The perks of writing this article is that I get to write about all my favourite places to go! Having just moved to Norfolk five years ago, I discovered this wonderful wood by accident, we parked up on one of the lay-bys at the side (although there is an official car park) and after a few footsteps found ourselves in the midst of some beautiful trees. It was late spring and the beech trees had that amazing bright fresh green on their leaves which is always indicative of a new season after the long bare darkness of winter. In fact that was the lasting impression I have of Bacton wood, the long avenues of beeches which look stunning from spring into autumn.

Looking at the North Walsham website, Bacton Woods (also known as Witton Woods) I read that the replanting of the site between 1956 and 1971 has encouraged a natural regeneration of plants such as bluebells, wood sorrel and dogs mercury all of which would have been found in ancient woodland. There is also an ancient oak, a bronze age burial mound and an old pot boiling site where it is still possible to find shards which would have shattered from fires.

It is now owned by the Forestry Commission and is part-managed by North Norfolk Council. There are three marked paths which makes it an excellent spot for dog walkers, cyclists and horse riding. Bacton Woods can be found 2 1/2 miles out of North Walsham off the B1150 (Happisburgh road). 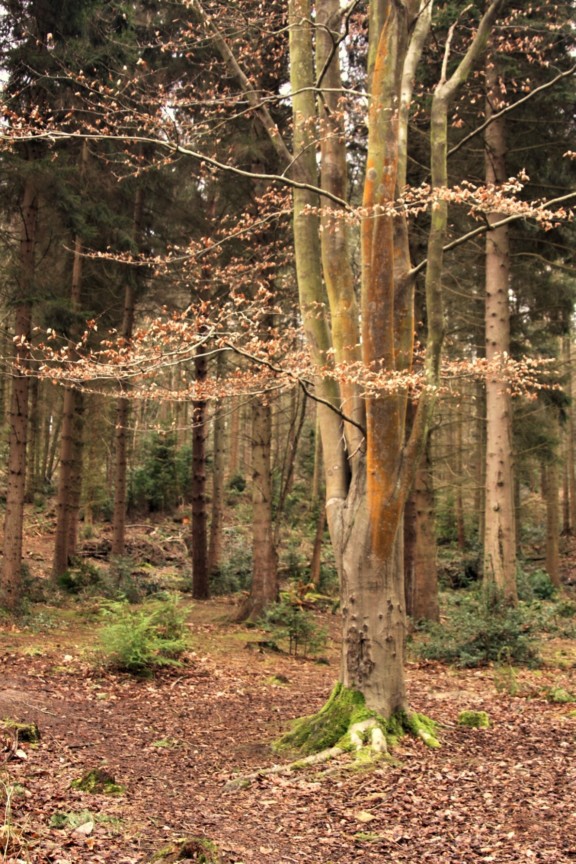 The obvious choice of many, this is by far Norfolk's largest forest. The forest was created by the Forestry Commission after the Second World War when the reserves of oak and slow-growing trees were on a serious decline. It is the largest man-made lowland forest in Britain, and stretches over 19,000 acres which straddles into Suffolk as well.

Thetford Forest is made for a family adventure. High Lodge is at the centre of all activities, whether it be an adventure playground, horse riding, cycling trails, outdoor gigs and theatre, walking trails, it can all be found here and is open pretty much all year round.

If like me, however you're after a more relaxing and more naturalistic experience, Thetford Forest boasts a range of wildlife, fauna and flora. It is home to several species of deer (muntjac, roe and red) as well as some of the lesser-seen birds including nightjars, crossbills, siskins and an introduced population of golden pheasants. Check up on how to get there through the website mentioned. 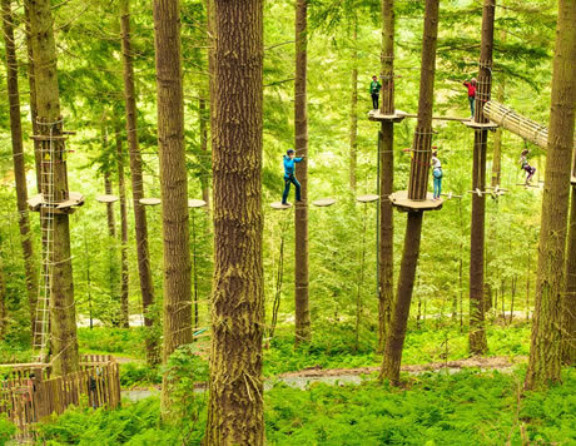 To be totally honest, I was hesitant to include Foxley Woods in this list as having walked around it recently to refresh my memory of it, I have to say that in the depths of late winter it isn't the most inspiring sight! But then I remembered how it looks in early summer and the wealth of flora which can be found within, all of which transforms the look and feel of the wood and all of which were obviously dormant on an afternoon in early February (image Richard Osbourne).

Foxley is actually a nature reserve managed by Norfolk Wildlife Trust and is the largest ancient woodland in Norfolk. It is recorded in the Domesday book and parts of it are reported to be over 6,000 years old. The term 'ancient woodland' can conjure up winding paths, gnarly trees and paths which lead into thick undergrowth, sometimes never to appear again; this is not how Foxley woods is however. Due to the management of the woodland, the paths are straight and wide, almost grid-like at times, and although this takes away a little character of the place, it is very accessible and allows good views between the trees.

Bluebell time (April/ May) is when Foxley Woods comes into its own, swathes of indigo cover the ancient parts of the woods where other plant species can be found including herb paris, early purple orchid, lily of the valley and meadowsweet to name but a few. The woods are home to a huge variety of birds and butterflies; green and great spotted woodpeckers, nuthatch, tree creepers, tawny and barn owls, sparrow hawks, kestrels, white admirals and meadow browns.

To find Foxley Woods, turn off the A1067 (Fakenham Road) and go through Foxley village, the car park and entrances are clearly marked. 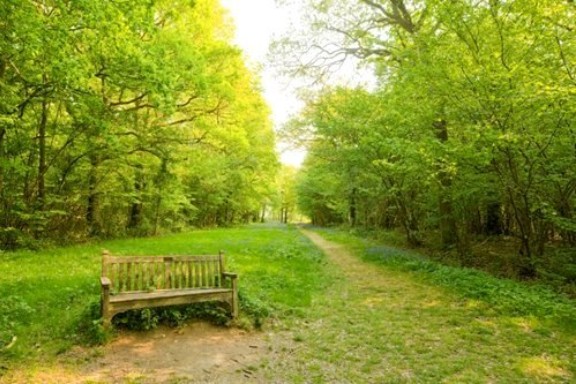 By far the smallest woodland in this list, Thursford earns the trite title of 'hidden gem'. A tiny pocket of ancient woodland situated three miles (5km) N.E. of Fakenham, this ancient woodland boast some of the county's oldest oaks. It will be no surprise that bluebells are plentiful here in springtime as well as carpets of snowdrops and daffodils. Branches which have fallen from the trees and rotting stumps provide a haven for insects and other wildlife.

Thursford Woods is a great place to take children; it’s a short walk around (no excuses for grumbles about tired legs!) and there is plenty to point out and explore, including a pond and all the fascinating creatures that inhabit it. There is a small piece of consecrated ground within the wood, marked by iron railings and a wooden cross. Rhododendrons grow in abundance and are another reason to visit later in the summer (images: left by Dave Enfield and right by Richard Osbourne). 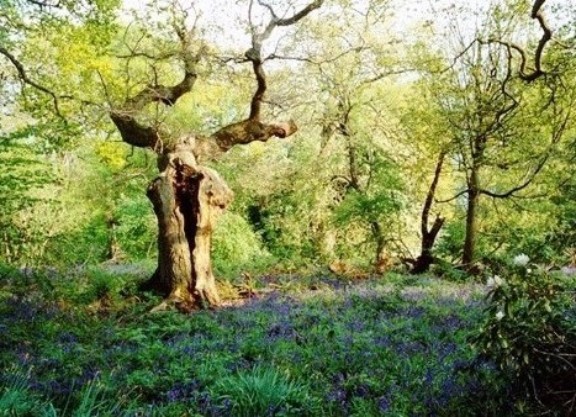 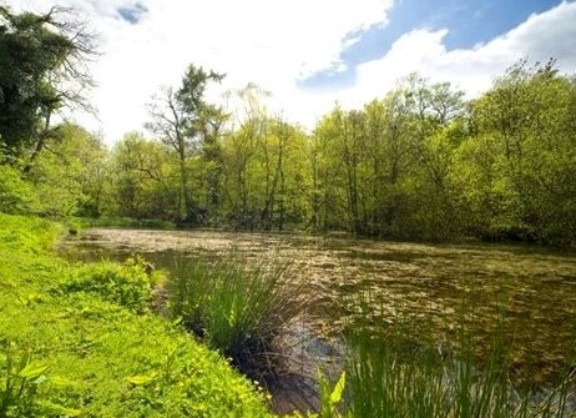 This is a new discovery for me and I can't wait to visit later in the year to find out what else grows here. When I visited here recently, the feature which mostly stood out was a beautiful array of catkins from the hazel trees, bringing some much-needed spots of colour against the dark outline of the trees.

There is a large depression in the middle of the wood, known as the devil's dish, according to website Hidden East Anglia (myths and landscape legends) 'in 1717 human remains and relics were said to have been found here but instead of being removed to the churchyard, they were reburied on the site, this was believed to have incurred God's wrath and several oak trees were seen to sink into the earth, with water bubbling all around.' A story indeed! And it does lend itself to the enchanting atmosphere of Mossymere, the trees fold in and I felt wrapped up in a fairytale, the mists rising up around the trees and bringing out the bright green of the moss on the trees, again a great spot for bluebells in the later months.

It is situated on the road between Saxthorpe and Little Barningham, and you can park at Mannington Hall (just over one mile from the woods) or find a lay-by on this road.

Obviously this list is not exhaustible and I now think with reluctance of the other woods I could have included, Holkham Woods near Wells beach, Tyrell's Woods and Blickling Great Wood are up there too but I will leave it to you to discover them and compile your own top 5 woods in Norfolk!

Article contributed by author and ‘The Village Gardener’ Fritha Waters. She often ventures out with her children who also love the outdoors (image right). 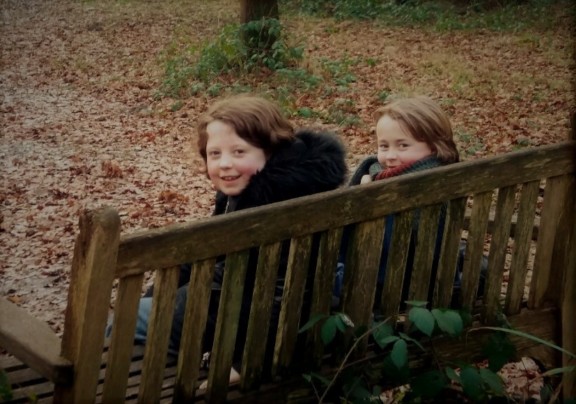