The leaves are falling, the nights are fading and the countryside is having a grand finale in the bounty and beauty which can be seen all around. Apples are bursting from the orchards, the hedgerows are littered with black gems of blackberries and rose hips glisten in the low golden light. Historically, this would have been the time when we would have stocked up our larders, carefully storing the fruits and vegetables of the summer away so that we would have provisions to carry us through the lean times of winter.

Of course now in our modern times where we have a plethora of choice in terms of the food we buy and the ease in which we come by it, i.e. a trip to the supermarket as opposed to trekking for miles to a particular spot. We also have access to all sorts of food, no matter what time of year; strawberries in winter, bananas and pineapples becoming cheap and commonplace due to the importing of food stuffs from all over the world. So we don't have to forage out of necessity any more, it's more of pleasurable activity. Wild food foraging and 'fungal forays' are becoming more popular as we take more of an interest in the wild foods that our countryside can provide. We are becoming more conscientious about the air miles that our food travels and are encouraged to buy local as much as possible.

It goes without saying that autumn is the perfect time for gleaning from the trees and hedgerows, and below are five of the best things to look for right now as well as an idea of what to do with them!

In terms of the law I've noted details further below, but in a nutshell (excuse the pun!) no uprooting and no gleaning so as to sell to restaurants or pop up cafés. So, here are a few gems of the land to look out for!

Although these are more likely to be found in the freezer by now (if you have already harvested the hedgerows) blackberries were quite early this year but there is still some to be found in bountiful sunny spots. Blackberry and apple crumbles are the obvious answer (stewed with cooking apples, sugar and cinnamon, and a crumble topping of your choice - for a more rustic crunchy crumble, why not add some granola or chopped nuts?). Blackberry jelly is surprisingly easy to make, again stewing the blackberries together with cooking apples, straining the juice overnight and combining with sugar to make a beautiful clear jelly, perfect with thick brown toast. Incidentally, blackberries are rich in vitamin C and have one of the highest antioxidants levels of all fruits. (Top and jelly image by Lesley van Dijk) 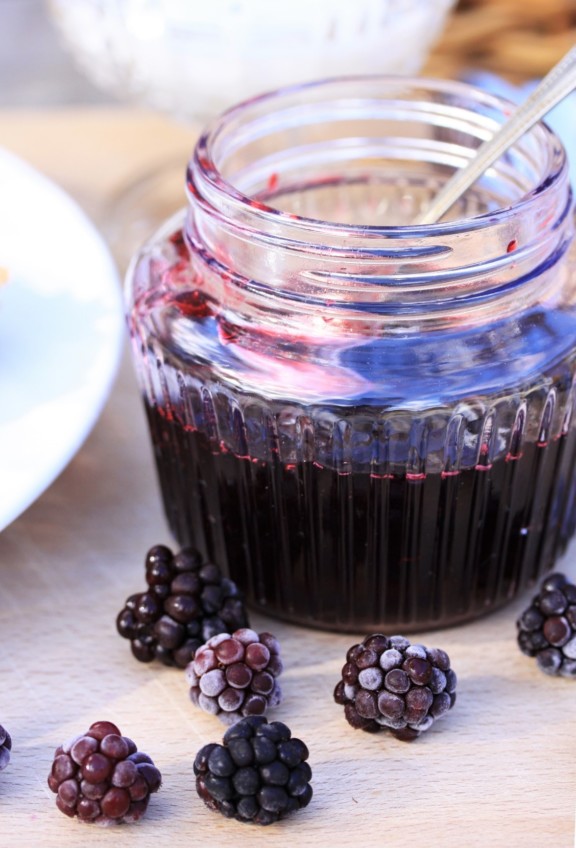 These are the fruits of the Corylus (hazel) tree and are seasonal. One of the few things which are probably not available all year round, so to be savoured more! They are sold fresh, unlike most other nuts, and mostly available from August onward up until Christmas. But you have to be quick to beat the squirrels if you would like to forage some!

As cobnuts are fresh, they should be kept in the fridge, loose husks removed (though not if they're green and firmly attached to the nut) and they should not be allowed to sweat.

Cobnuts can be eaten fresh, and like chestnuts are delicious with a little salt. Fresh cobnuts are best eaten straightaway as they don't keep well if they're chopped. They are equally tasty roasted and added to both sweet and savoury dishes (eg stirred in with pasta or added to a fruitcake).

A tip for removing the thin skin around the nut when shelled and roasted is to fold the nuts into a clean tea towel while still hot from the oven and rolled vigorously, the brittle skin should flake away easily.

(Cobnuts and rose hip images are by Fritha Waters, others below by Lesley van Dijk) 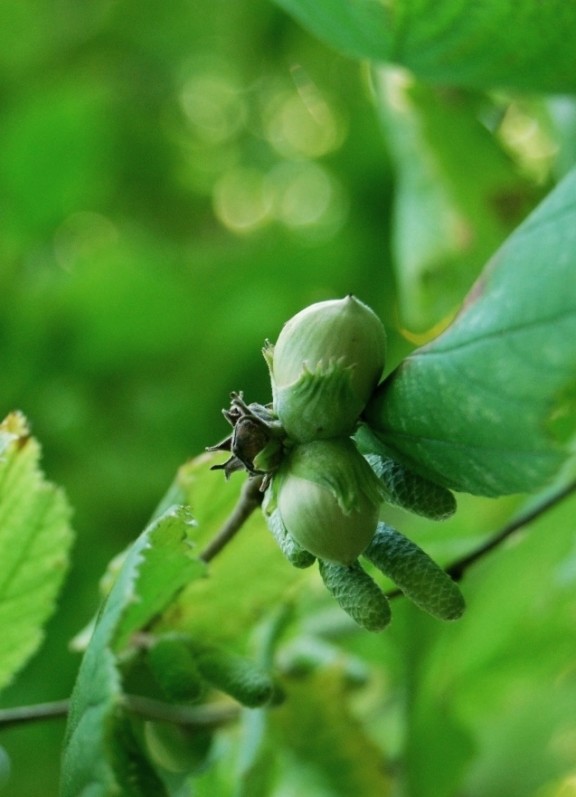 Where to begin? This year has been especially good for apples and they can be seen bursting from every tree. Everyone has their favourite way of eating them; whether it be crisp and juicy, fresh from the tree, stewed into a pie or crumble, or you could have a go at making your own apple juice. 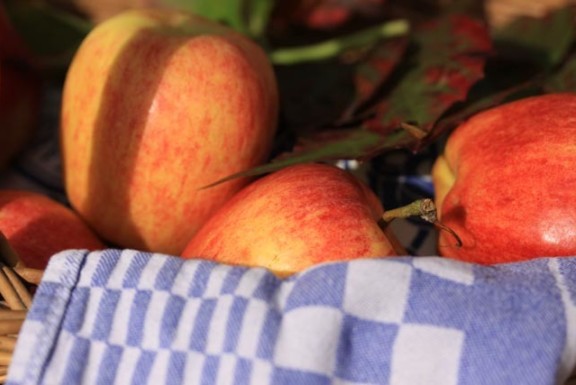 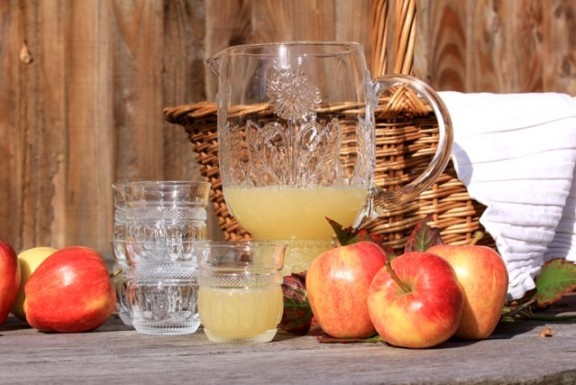 Good varieties to use for juicing are Granny Smiths, Galas or Fujis. Start by washing and coring the apples (about 18 to 20) - no need to peel. Then place the apples in a saucepan and add just enough water to cover them, too much and the juice will be too diluted. Slowly boil the apples for about 20-25 mins or until the apples are soft. Slowly ladle the hot juice through a fine mesh sieve, gently mashing the apple to produce maximum juice. Taste the juice after it is cooled, add additional sugar or cinnamon depending on your preference. The left over apple mush could be used as a puree or sauce.

Although late in the season, pay a visit to White House Farm on Blue Boar Lane in Norwich where you can find apples to pick yourself. Come back in the summer and there is a lot more to choose from, including raspberries, strawberries, cherries and pears.

Also known as haws or heps, rose hips can be found everywhere at this time of year, dotting the hedgerows and fields with small 'bolts' of vivid reds and oranges. Contrary to some thoughts that the hips are poisonous (some species of the Rosaceae family do contain a small amount of cyanide), but there is no reference in any scientific journal which states that the rose hip seeds are toxic (see Eatweeds for details).

On researching what you can do with rose hips, I was surprised to see the diversity of the fruit of the rose. Fresh rose hips contain a lot of vitamin C and are adept at preventing colds and flu. They can be made into herbal teas alongside hibiscus, and made into jellies, soups, beverages, pies and wine. Rose hip syrup is known as a general winter cure-all, either to be drunk the spoonful or drizzled over desserts.

Rose hip syrup recipe: To make 1.5 litres of rose hip syrup, pick your rose hips (eg wild dog rose), about 1 kg is necessary. If this is not available then reduce the amounts of the rest of the ingredients. 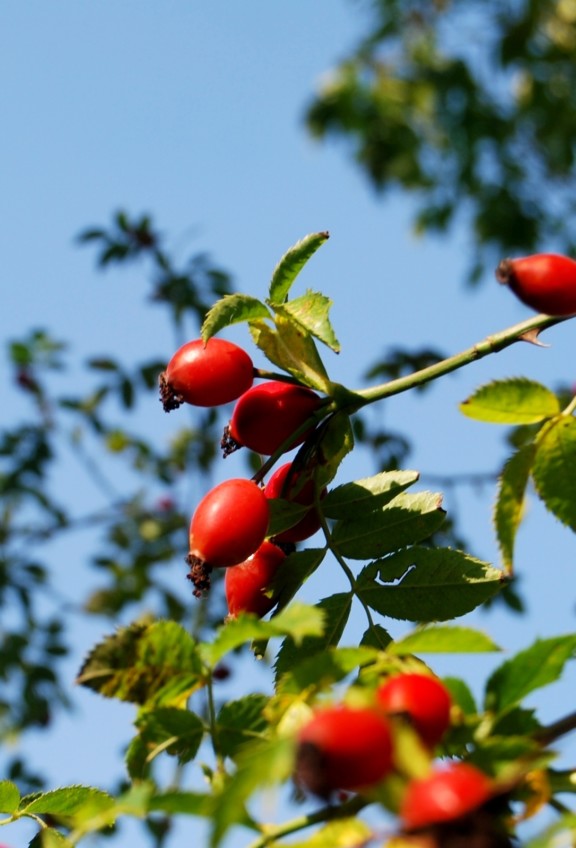 Traditionally a food associated with Christmas, the tasty nut of the Castanea Sativa (Sweet Chestnut) tree, conjures up nostalgic scenes of ruddy chestnut sellers, huddled around glowing braziers on a snow covered street, passing out bags of scorching hot nuts on which to burn your fingers as you try and extricate them from their shells.

The sweet chestnut was introduced in Europe from Sardis (an ancient city in Turkey's Manisa Province and was then called the Sardian nut. It has been a staple food in Southern Europe, Turkey and large parts of Asia for thousands of years, replacing cereals where they would not grow well. Alexander the Great planted chestnut trees across Europe while on his campaigns throughout. The chestnut symbolised chastity to the early Christians and until the introduction of the potato, whole communities relied on it as a main source of carbohydrates in areas where wheat flour was scarce.

Easily identified by their large spreading canopies, the chestnut tree's ovate leaves are 10-30 cm long with widely spaced points and are already starting to turn brown and golden. Soon they curl up completely as they are one of the first trees to drop their leaves in autumn.

Chestnuts are obviously enjoyed roasted in the traditional way but don't forget to make a slit in the skin to prevent explosion in the oven or fire. They can be put into many recipes lending a strong flavour to many dishes, sweet as well as savoury, from pies and nut roasts or if you're feeling sophisticated, try out the recipe for Marrons Glacé, a good one being on the River Cottage website.

Now and for the rest of the month is a good time to go foraging for chestnuts, try the woods at Bacton, Foxley or Blickling's Great Wood. There is also a good stretch of them at Holt Country Park. Remember to go armed with gloves and stout boots as the burrs will prickle!

So while the sun is still strong in the sky, winter is still a good way down the road, and the fruits and nuts are ripening in the trees, pick up a bucket and go see what you can find, it's all for free!

Article contributed by author and ‘The Village Gardener’ Fritha Waters. 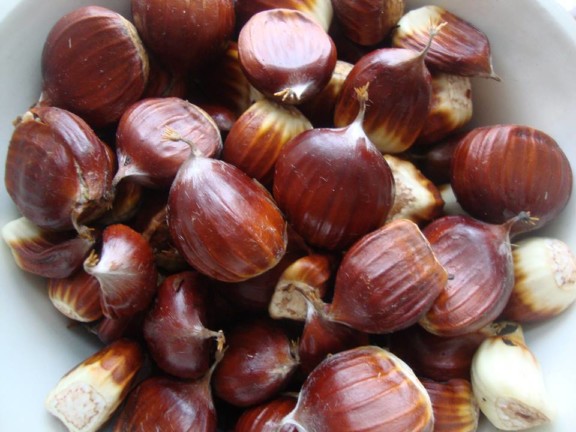 The Wildlife and Countryside Act 1981 states that it is 'illegal to uproot any wild plant without permission from the landowner or occupier'. Uproot is defined as 'to dig up or otherwise remove the plant from the land' on which it is growing.

This can be found on Northern Wilds.